Low-income families miss out on £79m toward fruit, veg and milk as Healthy Start scheme falters

Up to 50% of eligible families could not access the Healthy Start scheme in the last year, according to fresh analysis by Sustain, adding to calls for Government to publish uptake data, fix problems with the scheme and increase the value of payments in line with inflation. 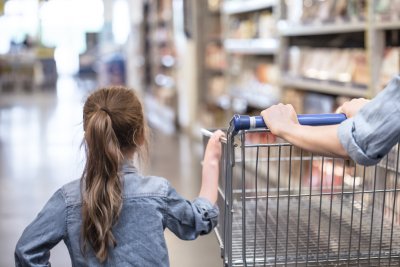 The scheme, which has historically underperformed, has been beset with increasing problems since digital cards were introduced, with eligible families reporting problems applying for and using the cards, as well as long, costly waits to get through on the helpline. Families already receiving payments are also seeing their value shrink as food inflation tops 16%, leaving more households unable to afford essentials including infant formula, with the least expensive product on the market (Aldi’s own brand) now costing 10p more than what a family with an infant receives in England, Wales and Northern Ireland.

The Government also stopped publishing the localised take up information public health teams need to identify and locate eligible families in March 2022. At the time, the scheme had faced a number of challenges, including reports of struggling families left humiliated at the tills due to issues with the digitisation of the scheme, and nearly 350,000 eligible households not switched from paper vouchers to digital cards.

Sustain and a coalition of leading charities, Directors of Public Health and food partnerships are urgently calling on Government to publish uptake data, increase the value of Healthy Start payments in line with inflation to help struggling families, and fix the problems with applying for and using the new digital cards which are leaving hundreds of thousands of eligible families without access to the scheme. According to Sustain’s best estimates in the absence of precise Government published data, this could be up to 253,887 eligible households in England and Wales alone1 missing out on over £78million in Healthy Start payments toward healthy food.

Read our open letter, signed by 118 local and national organisations.

In March 2022, the Department of Health and Social Care ceased publishing scheme uptake and eligibility data per local authority area, leaving health professionals unable to plan meeting growing demand for the scheme. Through freedom of information requests and DWP data, Sustain estimates a shockingly low uptake numbers of 53% in England and 58% in Wales2. We also estimate that an additional 14,863 households were eligible for Healthy Start in England and Wales in August compared to March 2022. This number is expected to have risen significantly since then.

Frontline health and social care professionals working with families tell us that the number of families in desperate circumstances is rising, but they don’t have the data they need to support them. Healthy Start is a nutritional safety net for pregnant mothers and young children, and is an important part of the Government’s support package for low income families. The scheme should be expanded to help families through the current cost of living crisis, not limited by technical problems. We ask that ministers act without delay.

The current cost of living crisis, which has seen food costs rise 16.2% and housing, water, electric and gas skyrocket 26.6%, lands on top of a long term poverty crisis exacerbated by the pandemic. One in four (25.8%) households with children has experienced food insecurity in September 2022. Research conducted by the Food Foundation also revealed that food insecure people are five times more likely to cut back on purchases of fruit and vegetables than households who are food secure.

As the cost of living crisis continues, supporting and bolstering the Healthy Start scheme is more important than ever. Our research has shown that the number of families experiencing food insecurity has continued to rise since the Covid pandemic. But the current crisis has made the situation worse. We know that nutrition during early childhood is a critical part of supporting normal health and development, yet many families are having to cut back on buying healthy foods or are being pushed into food insecurity. Helping more eligible families to access this vital scheme at this crucial time ought to be a national policy priority.

Latest figures compiled by First Steps Nutrition Trust showed that between August 2021 (when the scheme last received an uplift in value) and November 2022 the cost of infant formula has increased by as much as 23% - more than double the average increase in food prices. The current Healthy Start allowance of £8.50 per eligible household with an infant under 1 year of age is now not enough to cover the full cost of any infant formulas on the market (the least expensive is £8.59 and is not widely available across the UK).

In the midst of the current cost of living crisis we are particularly worried about families with babies. For babies under 6 months who are not breastfed, infant formula is the only food that will sustain adequate growth and development, and it continues to be a vital source of nutrition between 6 months and 1 year. But it's increasingly becoming unaffordable. Because of price rises, there now isn’t a single tin on the market that the Healthy Start allowance can cover. If Healthy Start is meant to be a nutritional safety net, the allowance must keep pace with rising infant formula prices for those families that need it.

A letter, co-signed by Sustain, the Food Foundation and 115 other signatories including prominent Directors of Public Health, has been sent 14 December to the Secretaries of State at the Department of Health and Social Care, Department for Work and Pensions and the Chief Executive of NHS Business Services Authority urging immediate action to address the above issues.

Health outcomes are poor for many residents in Blackpool. Therefore, addressing health inequalities is at the front and centre of our public health priorities. Our town experiences some of the worst poverty and poor health outcomes in the UK, as well as food insecurity.

Sheffield University surveyed households during the pandemic and identified that in Blackpool 16.8% of households experience food insecurity and which is much higher than the England average of 10.4%. In October 2022, approximately 22,000 people aged 16-64 were claiming UC, many of which are working.

This is why Healthy Start is so vital locally, where the scheme supports pregnant women, infants and children to have the best start in life. According to most recently available data from March 2022 our Healthy Start uptake is one of the highest in England, at 79%. Our local health and BetterStart community connectors are working hard to ensure eligible families can benefit, but this is made more difficult without access to Healthy Start eligibility and uptake data.

It's concerning to know that many families are experiencing problems applying for the scheme and waiting many months for back payments. With the cost of living crisis, it has never been more urgent and we know that more people than ever need support with accessing healthy food. We ask for problems with the scheme to be addressed immediately.

Read the letter in full.

You can read an article in the Grocer about this story here.

1 Sustain's figures are based on the proportion of families in England and Wales on Universal Credit with children up to age 4 eligible for Healthy Start payments as of March 2022 when the eligibility data was last available, compared with the proportion of families on Universal Credit as of August 2022 who would be expected to be eligible for Healthy Start, minus the number of families who were registered as receiving Healthy Start payments that month. The total unclaimed is based on an average payment of £5.95 per household per week.

2 Eligibility data was not available for Northern Ireland, and Scotland runs a separate Best Start scheme.

Eat Them To Defeat Them is back

Government Healthy Start scheme has shrunk by £90m in a decade

Sainsbury's £2 top-up for Healthy Start is back

Fit and Fed in Plymouth