Pilot to increase the uptake of free school meals in Aberdeen

Even though the percentage of primary school pupils accessing free school meals has risen in recent years, there are concerns that not every child eligible for free meals is taking them. A new pilot project entitled “Torry Tasters” is starting in Aberdeen offering parents and children the opportunity to cook meals from the school menu, getting pupils to eat one extra portion of veg every day. 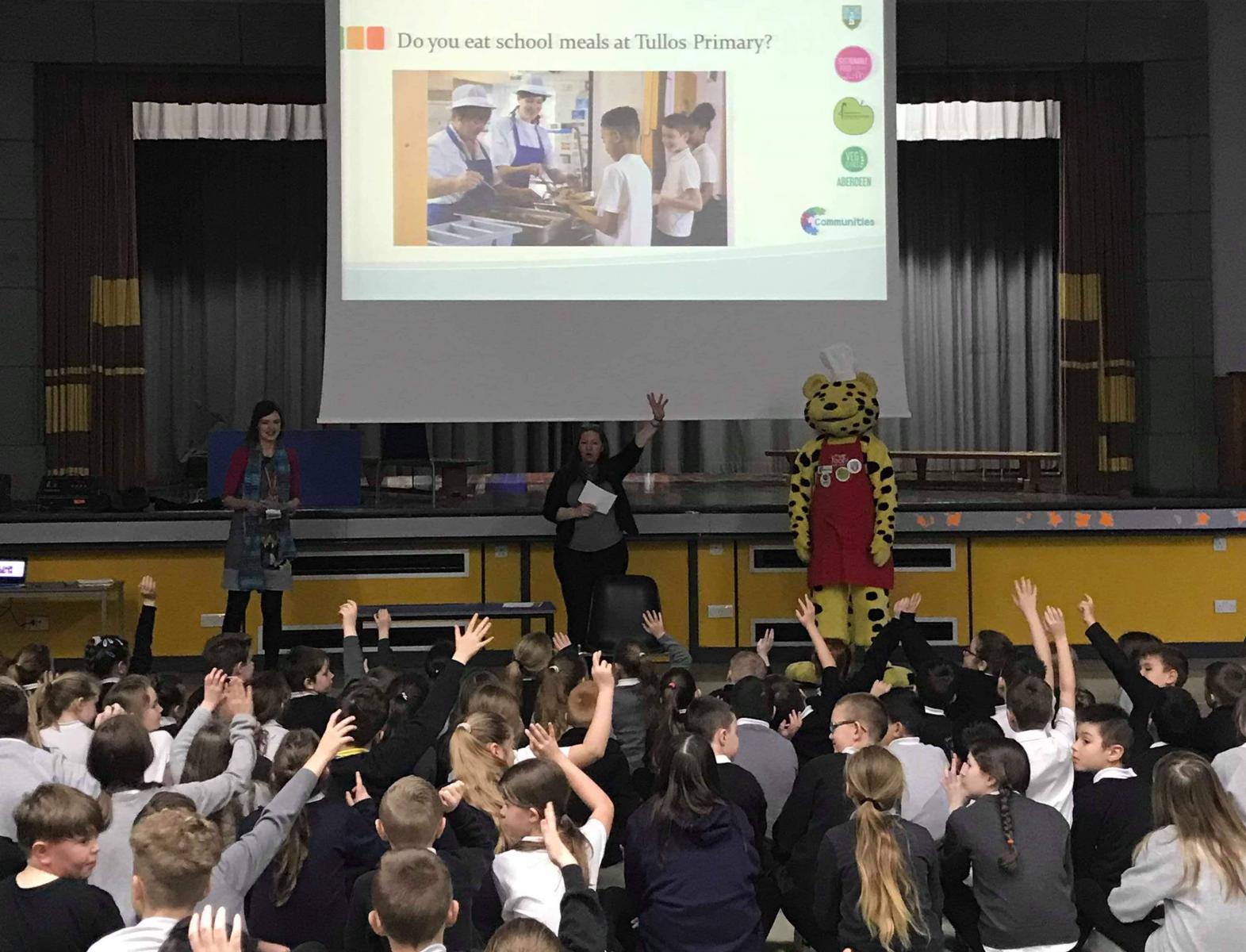 To kick-off the project, CFINE and the City Council Communities Team held an assembly with the whole school. Credit: CFINE

Torry Tasters is part of a wider project to improve uptake of free school meals . This will include a publicity campaign around school meals, healthy eating workshops with parents and pupils and food taster sessions at parents’ nights with the aim of increasing the uptake of free school meals at Tullos Primary and Walker Road Primary. It also links in with the Aberdeen Veg Cities campaign, which includes initiatives like the recent Christmas plant-based cooking classes, work to increase the uptake of Healthy Start vouchers and support for more locally grown vegetables.

With funding from the Aberdeen City Health & Social Care Partnership Healthy Improvement Fund, CFINE is partnering with the Aberdeen City Council Communities Team, Tullos Primary School and Aberdeen City Council catering team, the Torry Tasters pilot will start in February. It will offer parents and children the opportunity to cook meals from the school menu that they would not normally eat. There is funding for 18 sessions in total, with around 6 families per session taking part.

School meals delivered by Aberdeen City Council catering include two portions of vegetables as standard, higher than the average packed lunch, so getting more pupils to eat school meals will ensure kids are eating more vegetables.

To kick-off the project, CFINE and the City Council Communities Team held an assembly with the whole school at Tullos Primary to encourage pupils to engage with school meals. Aberdeen Mascot ‘Spotless’ came along to give his support and donned his Chef hat as he will be getting involved along the way. A letter went home with all the pupils offering free cooking classes with the Head Cook during February and March. The following day, a workshop  encouraged children to vote for their favourite meals and taste vegetable sticks and dips. The children are working on a logo and/or slogan with the class teachers for their ‘School Meal Campaign’. A booklet with photos and recipes will be produced and made available to every pupil in the school. This approach will be repeated at Walker Road Primary where pupils and parents will have the opportunity to participate in cooking at CFINE’s ‘Cook at the Nook’ in April-May and August-September.