After a successful run in 2018, Chef's Challenge was back to Glasgow to celebrate the amazing local chefs and food growers. 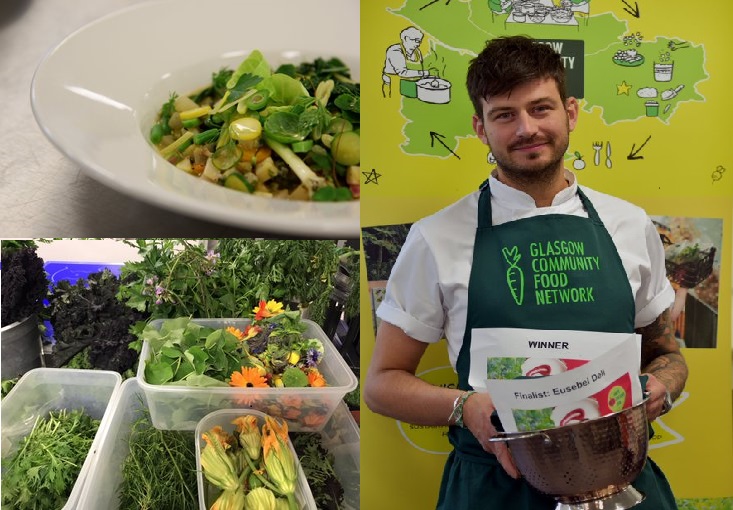 The winner Sebastian Wereski with his winning dish and some of the amazing local produce used in his creation. Credit: Errika Zacharopoulou

The Chef’s Challenge final followed a week of judging in September, where restaurants across Glasgow were challenged to create a dish using a box of locally-sourced fruits and vegetables. Twenty restaurants and chefs took part in this first stage of the competition. Five of these were involved in 2018 but the others were new to the idea and enthusiastic about using only local produce. Produce was sourced from ten community gardens, market gardens and allotments and a team of volunteers transported boxes of vegetables by bike across the city.

Eight finalists then took part in a live cook-off at the City of Glasgow College on Tuesday 1 October. The competition was judged by Gary Maclean, Scotland’s National Chef, food writer Cate Devine, and Jan Macdonald from Glasgow Allotments Forum. The eight chefs were tasked with creating innovative dishes using produce sourced from Glasgow’s market gardens, allotments and community gardens. Chefs were scored for creativity, taste, presentation, sustainability, and how fully the dish was centred around the produce from the box.

Eusebi’s head chef Sebastian Wereski was crowned the winner with a dish of seasonal root veg risotto finished with garden herbs. Sebastian competed alongside chefs from restaurants including last year’s winner Ox and Finch, 78 Bar and Kitchen and The Balcony Café.

“This competition is a chance for Glasgow’s chef's to showcase their talents and make locally grown veg the star of the show!” Gary McLean

“Being a judge on last year's inaugural Chefs' Challenge was a revelation for me. This year's Challenge reinforced my conviction that this is an amazing and unique culinary competition that showcases the passion and skill of Glasgow's chefs and growers. Together they have the power to transform the city's poor dietary reputation and show the world that it has a more positive story to tell.” Cate Devine

"In bringing the local growers and chefs together Glasgow Community Food Network hope to create relationships that can contribute to a stronger and more resilient local food economy. We are currently co-developing Glasgow’s Food Strategy which will be a routemap for Glasgow to become a sustainable food city. This competition is part of that." Abi Mordin, Chair at Glasgow Community Food Network.

The Chef Challenge was organised by the Glasgow Community Food Network as part of the Veg Cities Glasgow campaign to get more locally sourced seasonal food onto the plates of Glaswegians.